How to throw a detective mystery party game for kids?

Kids love to play detective! Organizing a police investigation for their birthday party is an excellent, fun and educational activity in which they will take great pleasure in playing. We will explain to you how to throw a successful detective mystery party game for your kids!

Whatever their age, children love to play detective. Organizing a detective mystery party game for a birthday is therefore a great way to keep the kids entertained, while keeping them happy while ensuring the success of your party. Just remember to adapt the story and the different puzzles to the age of your audience. From kindergarten, children will be able to put themselves in the detective’s shoes and go on a search to solve a mystery!

How to organize a detective mystery party game for kids:

The beginning of the story :

The scenario is very important in particular when it is about a detective mystery party game. You have to find a story to tell in which a disruptive event will happen. This event can be theft that has been committed, the disappearance of an object, an offense, a crime (be careful to adapt it to the age of the children). Create your script and give free rein to your imagination. No need to make it too complicated either. Children will have to collect clues and solve challenges and puzzles in order to solve the mystery.

• Museum theft: the alarm sounds and all the doors close automatically. A robbery has just taken place in the room of Prehistory. The culprit is still among the present people and locked up in the museum. It’s up to you to find it …

• The stolen bike: coming out of the bakery, Leon’s bike has disappeared! Fortunately, a police officer is present. He stops all passers-by and analyzes the scene of the crime! The culprit is not far away!

• The Countess’ jewelry: in a sumptuous residence lives a very rich Countess, her children and the servants: one evening, the Countess starts to scream: all her jewelry have disappeared! The safe is empty! Find the culprit among all the people present in the house!

• The contradiction of the witnesses: a detective is hired to clear Mr Leblanc, whom however everything designates guilty! Children will have to start the investigation again at 0, question the witnesses, gather clues and put all this out in order to find the real culprit!

Generate a list of suspects for your detective mystery party game:

Once you have chosen the topic of your investigation and found the disruptive event that will interfere with your story then you can start to think about the game as such.

When it comes to a police investigation, you first need a list of suspects !!

You can prepare a sheet on which you will write down the names of the various possible suspects. Under each of them, note informations, such as age, physical characteristics (eye color, hair …) a shoe size, the size of each one or a sign or a physical characteristic. For those more comfortable with computers, you can find characters from internet to put a real face in front of the children and then add your description.

Choose the number of suspects according to the desired playing time, depending on whether you decide it is longer or shorter. About 8 characters should be enough for a game of about an hour.

Choose the culprit immediately among the characters you have selected because this will allow you to carry out each stage of the game knowing who you want to eliminate from the list of suspects… It is the best way to organize a great mystery detective party game.

Progress of the game and collection of clues:

You have your story … The list of suspects is drawn up and you know who will be your culprit.

Now you have to set up a series of puzzles to allow children to eliminate a suspect at each stage of the game.

Plan a dozen little games, clues to find, puzzles to solve. With each resolution of one of them, the children will be able to remove a suspect from their list depending on the result found.

No worries ! Even if you are not used to organizing a detective mystery game, simple and well-known little games will suffice. The principle is simply that at each stage of the game, the child collects a clue that will allow him to steer through an innocent person.

So the first clue can be a number to find, with a mathematical challenge, which can correspond to an age. The person who will be this age will be removed from the list.

The second puzzle can be a hair color.

Each resolute riddle will allow children to narrow down their list of potential suspects until there are only one left.

A very popular game for children, the labyrinth can allow you, from the first riddle, to get to the scene of the crime before you really begin to eliminate the suspects! It’s a good introduction to the game.

There are all kinds. You can use Morse code or Braille but there are many other original secret codes you can use such as this: 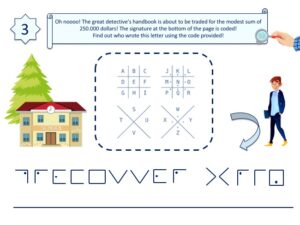 Have the children guess a word by replacing each letter with a number. This number corresponds to the place of the letter in the alphabet. You can of course make a variant of this game at will, for example by replacing the number with a drawing … Each drawing designates a letter.

Have the children decipher a clue … Please note that the word or phrase will be written backwards. It will take a mirror to decipher it correctly.

The traditional rebus always please to children. They will then have to find a new clue by deciphering a sentence or a word hidden behind drawings.

But of course, kids love riddles. So make them guess a new clue by asking them to think in a group of a riddle that will allow them to find a mystery word to eliminate a suspect.

It is important to set up some challenges in order to vary the different tests. You can very well use the famous game “draw it is won”, so that one of the team members has his team guess a new mystery word. The word found will give a new clue to eliminate a suspect

The outcome of the dectective mystery party game:

Prepare the result in a sealed envelope with the name or picture of the culprit inside. When children have finished the game, they have to come back to you with the name of the culprit. It’s your turn to open the “official” envelope and announce the result! Congratulate the children by preparing them a certificate which will allow them to keep a memory of their adventure. 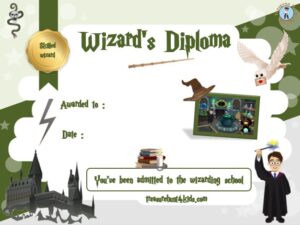 Our games are fun with various puzzles in a very colorful style and design! Organizing a detective mystery for a birthday party becomes very easy!

This is why, we also naturally created several age groups in order to adapt our games to the development of each child.

Here are some examples of police investigation themes that you can find in our website.

Detective mystery games for kids aged 4-5 years to set up the best party ever.

Investigation at the farm:

The farmer is angry because the vegetable garden was completely devastated overnight. Children will have to investigate and find the culprit among the farm animals. This survey is suitable for the little ones. It is very original because here it will be necessary to find an animal and not a person! 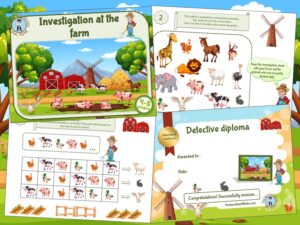 Chaos at the circus:

There’s panic under the big top this morning. While everything was ready for the big premiere that was to take place this evening, a little rascal had fun putting all the mess! Put everything in order on your way and of course find the culprit! 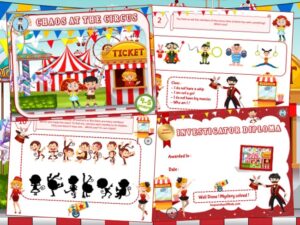 These detective mysteries are suitable for kids aged 6-7 years. Children start reading et learn the numbers. So the riddles can be more difficult, according to their age.

Who ate the candies ?

True detective mysery, “CLUEDO” style: Léo is going to be 7 years old and has invited his friends to celebrate his birthday! In anticipation, mom bought many candies. But now, Leo finds an empty package in the bin and the other packages are missing! Children will have to find the culprit among the family members and perhaps even the rest of the candies … If the culprit has not eaten everything! With a real list of suspects and an investigation sheet, children will have to solve different puzzles in order to eliminate one by one the suspects from their list until there are only one left! 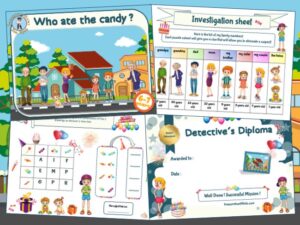 Mystery in the savannah:

During a photo safari in the African savannah, our 2 reporters make a very strange discovery! They take pictures of the animals, but one is missing! The king of animals, the lion, has disappeared! Investigation in the form of a treasure hunt where children will have to find out where the lions went and especially what happened to them! 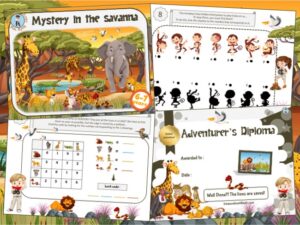 To children from 8 years old:

The police investigation games for children from 8 years old become even more complex. Stories like puzzles are adapted to their age!

Who poisoned the countess ?

Investigate to find out who tried to poison the countess … Indeed, someone tried to poison her. A detective goes on-the-spot to help the police in the investigation! The culprit can only be found among the staff of the manor! 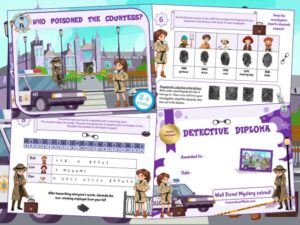 Investigation on the heart of Paris:

A theft took place at the Louvre museum! The police surrounds Paris! the thief is trapped. As a detective, you are embarked on an investigation that will take you through the streets of the capital, passing by the biggest Parisian monuments. 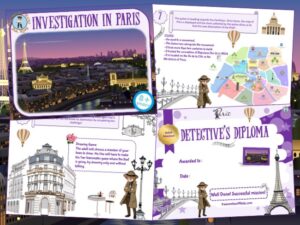