Here is an awesome collection of jungle birthday party games, perfect for throwing the coolest Safari party ever.

How about transforming your living room into a lush jungle for a birthday party? Or how about organizing a party surrounded by little explorers and wild animals like lions, zebras, giraffes and tigers in safari mode? We give you all our expert party tips to organize a crazy Jungle Party !

The jungle theme is THE trend of the moment. Indeed, this theme is neutral and appeals to both girls and boys, to the youngest and the oldest children. It is also rather easy to make and there is a multitude of accessories in the stores.

Discover our jungle and safari themed games to easily animate your birthday party. Easy to set up for parents and fun for kids.

Brave explorers have discovered a very valuable manuscript that indicates the presence of a statuette with extraordinary power: to give eternal youth. The problem is that it is located somewhere in the heart of the Amazon jungle. Will you succeed in braving all the traps to find it? Turnkey game kit for about 1h30 of adventure.

Treasure hunt in the savannah

During a safari, our two young adventurers find themselves confronted with a very strange mystery. Zebras, giraffes, elephants… All the animals are present but one is missing! Indeed, the lions have all disappeared! Here is a treasure hunt in which children will have to understand what happened and find the missing lions. Game available in 4-5 and 6-7 years old.

Now it’s time to set the scene…. in your living room! For a more real than natural jungle, you just have to hang some garlands of tropical paper leaves, bought or made by you. Green should predominate, so don’t be afraid to overdo it, but also add a few touches of color like orange or yellow to brighten up. Always in these same colors, some inflatable balloons will bring the festive touch. If you have a garden and the weather allows it, take advantage of it to install your theme.

Organize a jungle birthday party with our games

This birthday game is really fun! Divide the kids into two teams. They will have to stand in a line. The first child bends forward at the waist, puts one arm in front of his face like an elephant’s trunk, and reaches between his legs toward the person behind him.

The next child bends over, grabs the first child’s “tail” with his or her “trunk,” then extends his or her “tail” through his or her legs, and so on until you have two teams of “elephants” lined up and ready to go. Then have a race (you can repeat the exercise several times to allow other children to be the leader of the elephants).

Which animal am I?

Divide the children into two groups. The first group whispers the wild animal they want to introduce. Together, the children imitate the animal by mimicking and reproducing its call. The second group plays the role of the audience and must guess which animal it is. A referee measures the time needed until the correct answer is given. After a few rounds, the groups change roles. The group that guesses all the animals the fastest wins (add up the respective times).

This is a version of musical chairs. Draw a circle (the size depends on the number of children present). In the middle of the circle, place stuffed animals or small figurines of jungle or savannah animals.

Turn on the music. The children will turn around the circle on the floor at a distance. They should not be right at the edge of the circle but 2 or 3 meters around it.

When the music stops, the children must run to try to catch an animal in the center of the circle. Always place one less animal than the number of children. Remove one animal each round. The last child wins the game.

Wake up the lazy lions: the most hilarious of all jungle birthday party games

A child plays a cub who wants to play. Everyone else acts as if they are tired adult lions. They lie on the ground, inert, and must not move. The cub wants to play and tries to wake up the other lions. He can do anything, but he is not allowed to touch them. When a lion moves, laughs or talks, he is awakened and helps the cub to wake up the rest of the pride. At the end, all the lions play together and are allowed to hop, howl or dance to fun music.

Materials: no materials needed, except perhaps blankets or floor mats, music to dance to (e.g., downloaded from smartphone connected to speakers).

Place candy around the room or garden. Give the children a hat and binoculars and ask them to hunt for lions, zebras and other jungle or savannah animals represented by candy. The one who brings in the most candy wins.

Who is the most skilled and flexible tracker in the jungle? Stretch green or brown ribbons across a doorway, an entranceway, an entire room, or outside between shrubs and trees. The children must try to squeeze through the ribbons without touching or tearing them. Who will be the fastest, the trickiest or the most fun? Set the criteria for the game according to the age and ability of the children.

Materials: roll of crepe paper, strong tape (that sticks to the wall but does not peel off the paint) or string, scissors.

Instruction: remove the crepe paper from the package without unrolling it. Cut out strips about 5 cm wide, unroll them and attach them at the ends to two opposite walls. Create a difficult, but not impossible path to cross.

Monkey Dance: the most rhythmic of all jungle birthday party games

Inflate one balloon per participant. Draw a monkey or monkey face on it (models available on the Internet). Each child ties a balloon to his or her ankle with a string. A small monkey is attached to each child. The monkey dance can begin: while dancing to the lively music, the children try to catch the monkey of another child. The monkey is considered captured when the child has crushed another’s ball. Everyone tries to save their own monkey. The last child who still has an intact balloon wins.

Materials: one balloon per child, a black permanent pen to draw on the balloons. String and scissors. Lively ethnic music, e.g. downloaded from a smartphone connected to speakers.

Hide lots of unshelled peanuts around your house and yard and tell the children that they are all elephants looking for their peanuts. Give each child a bucket or cup for the peanuts and have them walk around with their hands dangling like trunks. The winner is the elephant with the most peanuts and the best posture, but it’s not over yet…

Prepare pictures of jungle animals (examples: greeting cards, calendar pictures, etc.) and cut them into two or three pieces with serrated scissors. Give one puzzle piece to each child and hide the other pieces. Each child must find their missing pieces to form their jigsaw puzzle.

Animal Family Safari/ jungle Group: the most fun of all birthday party games

This is a game for a large group. Prepare papers with animal families: Mr. Lion, Mrs. Lion, and Baby Lion, and so on so that there are as many cards as there are participants. Distribute the papers to everyone so that they are folded and no one knows what they have received. One person is the game controller. As soon as he/she starts the game, everyone opens their paper and finds the animal on their card. They then begin to make the noise of the animal represented or written on their paper. They roar, bark, etc. but do not speak.

The goal is for them to form families. For example, Mr. Lion, Mrs. Lion and Baby Lion must identify their family in the crowd by roar alone. Once the family is formed, they must run to the designated area and ring a bell or hit the gong. The family that is able to get together first is the winner.

In the jungle, there are…

Have the children stand in a circle and each name a jungle animal (lion, zebra, elephant, giraffe, cheetah, gorilla, etc.). Stand in the center of the circle and toss a scarf in the air and say, “In the jungle there are…” (name an animal). The child named must pick up the scarf and throw it in the air in turn naming another animal.

Form a single file with the gorilla in the lead. The gorilla makes movements and the monkeys must imitate them. Examples include: jumping, somersaulting, raising your arms, crawling, clapping, spinning, crawling on your stomach, etc.

Jungle Safari : the most adventurous of all birthday party games

Go on a jungle safari with the kids. Cut up brown paper bags to make adventurer jackets (you can even paint them with camouflage patterns), make binoculars out of toilet paper rolls, hide animals all over your room and go on safari!

Don’t hesitate to discover all our other turnkey birthday game themes. Moreover, take a look at our website which lists all the ideas of games for children’s parties. Get a lot of great ideas! 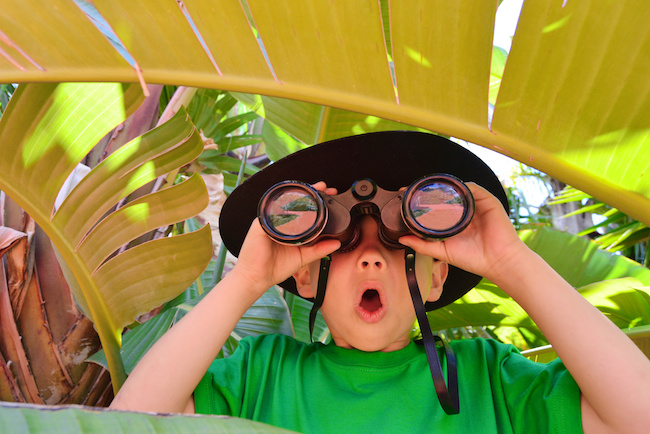