The ball is a great tool for the animator. Economical, easy to carry, it can be taken out quickly and allows to play a wide variety of games. Indispensable for any good leader! There are tons of fun sports-themed birthday party games out there to play with a ball. There’s a ton of fun to be had for all your guests.

There are many ways to have fun with a ball, whatever the age, children love ball games. For the little ones, it’s all about catching the ball, throwing, kicking, bouncing and developing motor skills in the form of small fun games.

Inclusive, funny, sporty, educational, birthday games, these activities for children with a ball also multiply the benefits for the social, physical and mental development of children.

No matter the terrain, whether it is a sports field, a garden, a yard, a beach, these ideas are simple to implement and can be transposed everywhere!

Playing with a ball requires skills that take time to acquire for a toddler. They first learn how to roll a ball, then how to throw it, and finally how to catch it. Since a child always learns the simpler things before the more difficult ones, he will play with a large ball, which is easier to handle, before he can catch a ball.

Check out all our treasure hunts for children from 4 to 12 years old.

This game can be played with a variety of rules and different types of balls. One player handles the ball by throwing it with his hands or kicking it around the field or playing area. The other players stand around the field and earn points if they catch the ball.

Before the ball is thrown, the thrower calls out a number between 50 and 500, and whoever catches the ball gets the number of points called out by the thrower. The first child to reach 500 points wins. Be careful, if the ball touches the ground before being caught, the child receives no points. Depending on the age of the children, adapt the points by giving round numbers such as 100, 200, 300 points…

You have to make all the players of the opposing team “prisoners”.

To do this, the players must try to touch the players of the opposing team with the ball:

When a player is trapped, he takes the ball into the prison and tries to throw it at the other team. If he manages to hit a player, he is released!

Once a player gets the ball back, they can’t move until they throw it back.

When the ball goes out of play, the prisoners in that half of the field get the ball and send it back. It is possible to pass the ball. However, children rarely make passes, preferring to aim at an opponent! When a whole team is in jail, the other team has won!

All players stand in a circle, legs apart, foot to foot. Players lean forward and make a fist with their hands, defending their goal.

The goal is to get the ball between another player’s legs to score a goal. If a player lets the ball go, he or she is eliminated and leaves the circle.

Variations of the tomato game:

Attention: the ball must roll on the ground and must not bounce.

Sit the children in a circle and play music. As with the musical chair, you will stop and the person who still has the ball in their hands (or the last person to hold it) is eliminated. The last person to play wins.

Kickball: the most popular of all ball games

On a field, mark off a large oval made up of 4 bases set at regular intervals. One team (A) will shoot the ball and run, the other team (B) will try to eliminate the shooters either by getting the ball back to their captain as quickly as possible (who is not allowed to leave his hoop), or by touching the shooter with the ball as he moves between two bases.

In turn, each player of Team B shoots the ball thrown to them by the opposing team’s captain and runs from base to base with the goal of returning to the home base.

The team change occurs when all the shooters (team A) are eliminated by the catchers (team B). The roles are then reversed.

Want to live a great adventure at home? Then, try our police investigations and become a real detective!

Kick the can : the most fun of all ball games

This classic childhood game involves hitting an object – a can, more often replaced by a ball – placed in the middle of a large field or yard. The ball, however, is protected by a goalkeeper, who tries to hit the approaching players before they can reach the ball. If the goalkeeper manages to hit all the players before the ball is kicked, he or she is declared the winner. However, if someone manages to get away from the goalkeeper and reach the ball before it is hit, he or she is the winner and becomes the goalkeeper for the next game.

A child takes on the role of the hunter. With his ball, he tries to reach the other children who evolve around him. When he succeeds, the child who is hit also becomes the hunter. They then work together to hit the other children and turn them into hunters as well. Since the game has only one ball, the hunters are allowed to pass the ball to each other, up to a limit of 3 successive passes before a shot. The last player not hit by a hunter wins the game. If a second game is played, the winner of the first round becomes the hunter

It is a cooperative outdoor game that allows children to let off steam.

King or queen means throne. The child enthroned for this game climbs on a stable and solid support. But the throne is highly coveted, so the king or queen must protect it from assailants who want to take his or her place. To do this, you have to be able to balance. Because the other children position themselves around the throne, beyond a defined perimeter. They then aim a ball at the king or queen to destabilize him or her and cause him or her to fall. The one who succeeds wins the game and takes his or her turn on the throne.

This balloon game is similar to a role-playing game, by playing a strong character. By being momentarily alone against all, the king or queen assumes the position of leader and gains self-confidence. Children also learn how to control their strength, so they can have fun in complete safety.

The Air, Land, Sea game is a fun way to get your brain working. Players stand in a circle. The first player passes the ball to the person next to him or her and says the word air, land or sea. The child who receives the ball must say the name of an animal, an object or a job related to the element mentioned. The one who breaks the chain by giving a wrong answer or no answer is eliminated.

This game helps children develop their listening and concentration skills. It is also a way to increase their vocabulary.

The bomb is a very famous game, we all played it once in our childhood, and it is still played in the playgrounds!

The aim of the game : Sitting in a circle, you have to turn a ball from hand to hand during a given time. The one who still has the ball in hand when the time is up loses!

To play the bomb game, bring a ball or a ball and a watch or a stopwatch. Stand in a circle, then when the timer starts, pass the ball from hand to hand, rotating until the time is up.

The last one to have the ball in hand at the end of the time limit has lost! The round starts again with the one who lost the previous round.

One of the ball games that is as simple as ABC and is great for fun and review before school starts. Have the children stand in a circle. You stand in the center. Say a word and toss the ball to one of the children (choose the difficulty of the word according to the age of the children, this is important). The child who receives the ball says the first letter of the word and throws the ball to a classmate who must say the second letter, then throws the ball to the next child, etc. Children who make a mistake must sit down and the game starts over. The last child standing is the winner!

Fun ball activities and games for kids of every age

Ball games are a great way for young children to develop their gross motor skills. Children will learn to coordinate their movements, find their balance, adjust their gaze to make the right gestures.

Through all these ball games, children discover their body’s abilities: jumping with their feet, shooting with their feet, passing… Then, they will grow up and enjoy playing ball games with others. Ball games then become a social vehicle. Playing with a ball is more interesting when there are several of us, and it allows us to make friends in a playful space where everyone respects the rules. These are the first spaces to create a bond with other children in a positive and natural way.

You can therefore see how much a simple ball will ultimately bring to your child. 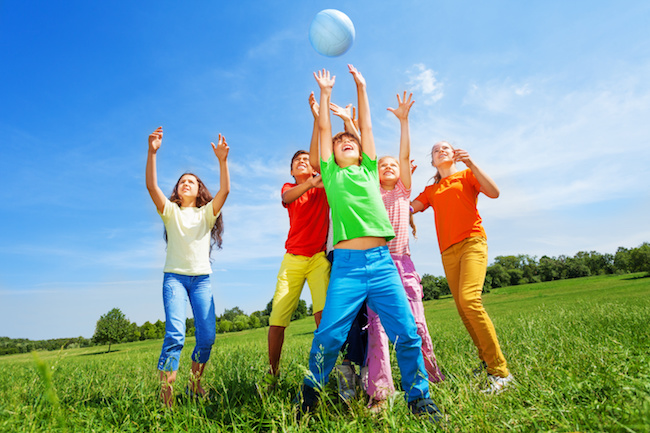