Olympic games are a very fun party activity. If your child is a big fan of the Olympics, you can host these games at home for his birthday.

How to organize Olympic party games ?

Olympics are great outdoor games that can be organized for a party with friends or a child’s birthday. You don’t need to be an accomplished sportsman, you just need to want to challenge yourself while having fun. The principle is to form teams that compete in a series of events and to designate the winners by a prize.

Olympic games are one of the great games that can be played outdoors in a large park for a birthday party or a family reunion.

Teams compete in sports events and at the end, a podium is made with the first 3 teams that have scored the most points.

The games and challenges below allow the organization of olympiads with a group of children or teenagers: in a vacation center, camp, sports trip, school trip, teen camp… The events are usually held in teams, each with 4 to 8 participants.

Preparing for the Olympics

Depending on the number of guests, form teams of two or four people, trying to balance the forces, and appoint a judge.

Discover all our treasure hunt games for kids for birthday animation!

Take a white paper, roll it into a cone shape and staple it in place. Have the children cut thin strips of orange and yellow paper (the colors of fire). Simply place them inside the cone (you can attach them with glue) and you will have a torch!

Set up a balloon board. Thread the knotted ends of inflated balloons through holes in a perforated cardboard to secure them to your cardboard board. Have children stand behind a line and throw three darts each at the balloons. Award points for each balloon a player pops with the darts.

Tug of War: perfect games for the Olympic Games party

Tug-of-war is a traditional Olympics event. Teams must duel each other in a test of strength.

A 25-meter thick rope is placed on the ground. A scarf or a string marks its middle. A marker is drawn on the ground, 3 or 4 meters on each side of the central point. The two teams position themselves at the two ends of the rope, behind the markers on the ground. The players are placed one behind the other, and hold the rope firmly. When the whistle blows, the players pull the rope with all their might. The team that wins the duel is the one that gets the scarf or string that marks the middle of the rope to cross the marker on its side.

Tips: for safety reasons, players on the same team are spaced 1 or 1.5 meters apart, with the smallest players in front. The rope, if possible made of hemp, should be held in the hand, not wrapped around the wrist.

Who will empty the bottle first?The game is played by two children or by teams with a 1.5 liter bottle of water per team.  The game consists of sending the ball to knock over the opponent’s bottle…

Using small hoops, a tunnel, and a sliding board, set up an outdoor obstacle course.

Use chalk or colored tape to mark where you want the children to start. Take a minute to do the obstacle course yourself, making sure it will work for your group. Have the children crawl between the legs of chairs. Pass them under a table. Tie a rope between two chairs and have them go under. Have them jump through hoops and use the elements of the natural environment to organize your course.

Set up a jump line. Each child jumps as far as possible and measure the distances. Keep the best distance for each team.

This is the same principle as the relay race, but here the objective is not to pass a baton. You have to put on a disguise for each relay! Laughing fits guaranteed 🙂

Set up a beam (or a rope that you attach to the floor). Children must put the Frisbee on their head and move on the beam without dropping it. You can increase the level of challenge a bit by asking the more skilled children to add objects to their Frisbee (pingpong balls, sandbags…). Variation: By adding obstacles to climb or go around, the level of difficulty is increased.

This is a fun children’s animation to organize in the garden. The little players will have to show their skills to succeed in the course without making an omelette with their eggs. The principle is simple. The children will have to complete a course by holding a spoon with an egg in it. If the child drops the egg, he/she starts the course all over again.

The sack race for the Olympic games Party

Procedure and rules of the game.

A starting line and a finishing line are marked out. The field may have obstacles to overcome. Depending on the size of the field, 2, 3 or 4 teams can compete simultaneously.

The players are placed behind the starting line. They each slide into a bag that they hold with both hands. At the starting line, they must reach the finish line as quickly as possible, without leaving the bag.

The winning team is the first one whose members have all crossed the finish line.

Tips: It is not forbidden to interfere with an opponent. But it is strictly forbidden to drop the bag with one or both hands. The contacts, if there are contacts, are thus done with the body to body, without the hands.

The objective being that all the members of the team cross the finish line, the role of the fastest or most agile is also to “protect” the weakest to allow them to advance.

A playing area is defined, on which a course is marked out. It includes obstacles and compulsory “gates”, a starting line and a finish. The course is marked with chalk or ropes, branches, etc.

Each team forms pairs of players: one will be the blind man, and the other his guide.

The “blind” players are blindfolded and are not allowed to remove their blindfolds. They are placed behind the starting line. At the starting line, they must reach the finish line by following the marked course. Each blind person is guided, by voice only, by their guide.

Variations: depending on the number of blind-guide pairs, the start is given at the same time for everyone, or staggered starts every 30 seconds. In this case, it is necessary to time the course of each blind person to determine the winning team.

Tips: the course may have obstacles, but these should not present a danger to the blind. Avoid holes in the ground or dangerous branches.

Before the start of the race, the guides will make a precise location of the course, in order to be able to guide the blind people efficiently.

Discover all our police investigation games. Become a real detective on your birthday.

Place stakes in the ground so that they are a few meters apart. Assign a number of points to each stake by writing the number on an inflated balloon and attaching it to the top of the stake. Have players shoot hoops around the balloon-topped poles. Score points based on the values.

I throw, you throw, we throw

It’s time to practice the skill of throwing. Show children how to throw a Frisbee and have them practice different ways afterwards by having small friendly competitions. Vary the ways of throwing: right-handed throwers throw from the left (and vice versa), children stand in teams of three and throw the Frisbee to each other in a triangle, etc. Length contests are held by marking distances with a piece of colored tape. Why not try throwing the frisbee backwards…does that work?

Set up several hoops on the ground about 2 meters apart. Children have 5 throws each. They must throw the frisbees to hit the targets.

Bring out your bowling set and set it up on a table in the corner of your outdoor yard. The children must knock down the  skittles with a Frisbee. Each child gets 3 throws. If you don’t have a set of skittles, you can replace them with empty plastic bottles. To make things a little more complicated, you can set up the game on the ground. This will make it more difficult for the children to aim the pins to make them fall.

The game area is delimited, about 20 meters long. At one end of the area, a wire is stretched at 1.80 meters from the ground. Inflated balloons are attached to it. A ping-pong ball is inserted in each ball.

The players are grouped, in teams, at the other end of the playing area. One member of each team is blindfolded and acts as the scout. At the signal, the scout from each team, guided by voice by his teammates, leaves his base and goes in search of a ball. As soon as he has found one, he must burst it, recover the ping-pong ball that has fallen to the ground, and bring it back to his base. Once a finder has returned to his base, he is replaced by another teammate who becomes a finder in turn.

Only finders are allowed to enter the game area. The other team members must stay outside and shout their directions. Each scout is allowed to retrieve only one ball at a time. The first team to have 6 ping-pong balls wins.

Discover all our Home Escape Rooms for children from 6 to 12 years old.

Divide the group into two rows to form 2 teams. Designate a starting line and have the two teams line up next to each other in two rows. Place 5-6 hurdles in front of each team, one meter apart. The first person in each group starts and runs over the hurdles to the other side of the field (designate a finish point). The next person can start as soon as the person in front of them has reached the other side of the field. See how long it takes each team to reach the other side. Repeat and see if they can beat their time. As you cross the hurdles, if you hit one with your foot, you must return to the starting point and start over. The first team to get all the way through wins the game. Alternatively, you can time the kids to see who can win the medal the fastest.

The disguised race for the Olympic Games Party

The course full of pitfalls

Make the last moments of your Olympic Games an activity too! You can create your own medals or buy them, play patriotic music (national anthem) and put them on podiums. 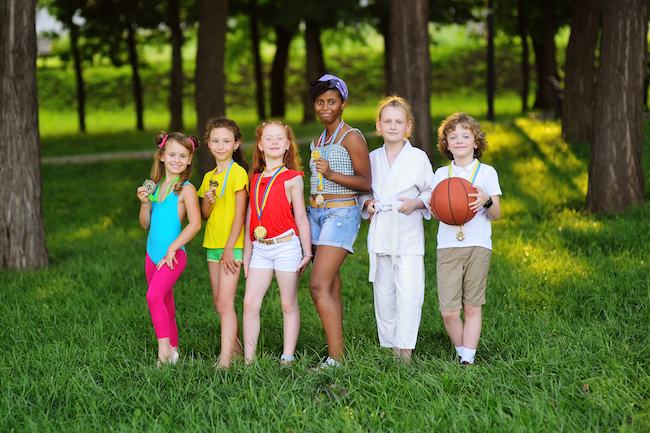