When it comes to pirate party games, you will be surprised how much the children love this theme. The treasure hunt is surely one of the children’s favourite activities! It’s a great idea to organise a pirate birthday party! It requires a certain amount of preparation time and not everyone has the time to create such a game.

Why would you want to spend hours organizing a treasure hunt when “turnkey” game kits exist to simplify your life.

We’ve thought of everything! No more headache organizing a birthday party! Choose your theme, click and print and the organization of your day is already almost done!

For family fun, for a snack with the kids, a birthday party or even without a special occasion, you can easily set up a pirate treasure hunt activity for your children thanks to our ready-to-print game kits. You have chosen the pirate theme! Good thing we have what you need!

A bit of history

The pirates theme is a traditional one. Indeed, the pirates impress the children… This time, it is their turn to become a real pirate by becoming an actor of the adventure. Pirates’ stories fascinate children.

To organize a pirate birthday party, a little lesson is essential. Take advantage of this moment to explain to your child or to all the children present the origin of pirates and their story.

A pirate is a thief who acts on the sea and not on land. The first commercial exchanges in which ships carried many goods brought thieves who wanted to steal them! Pirates have existed since man began to sail. The golden age of piracy was in the 17th and 18th centuries! Pirates used smaller ships in order to go faster to attack larger and slower ships loaded with goods. The crew of the attacked ship would let the pirates plunder the ship because pirates were known to be ruthless. The pirates would then offer the members of the looted ship to become pirates themselves! These ones accepted quite frequently because pirates were not only thieves. They were also the symbol of democracy. While the life of the sailors was difficult, the pirates shared the booty, voted by a show of hands and elected their leader! They were the forerunners of democracy and the symbol of freedom and adventure!

Story : After the discovery of an old document, you leave in search of a fabulous treasure. A ship is said to have sunk here more than 500 years ago and the treasure was never found.

In this game, children will put themselves in the shoes of real pirates, solve puzzles and challenges to find the treasure. This game is available for 4-5, 6-7 and 8-year and older children. A great pirate adventure awaits you… Will you be able to complete this adventure and find a treasure never found until now! 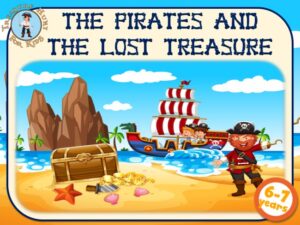 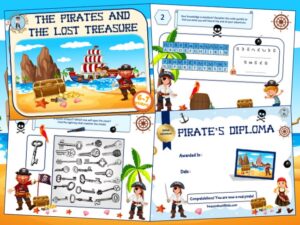 The treasure of the pirate island

A brook! A pirate story! A hidden treasure! An island! And above all a map! Here are all the necessary ingredients for a great pirate treasure hunt. This time, go on an island populated by pirates to find a treasure. Beware, your journey won’t be easy and the pirates are there to play tricks on you. This pirate treasure hunt is available in 2 versions: the first one is adapted to children to 6-7 years old and the second one is suitable to 8-year-old children and older.

Here are two different stories that you can find on our site in a complete printable treasure hunt game kit on the theme of pirates… While in the first story, you have to put yourself in the shoes of a pirate in order to find a treasure, in the second game, you will also have to find a treasure, but this time by thwarting the traps set by the pirates. It’s up to you to choose the story that suits you best according to your child’s age group as well. 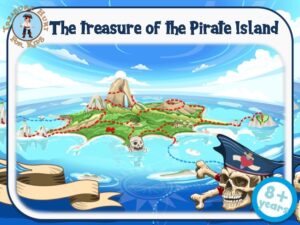 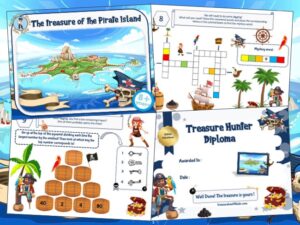 Treasure hunt of pirates and fairies

Fairy stardust has been stolen! The poor little fairies have lost all their powers! They must find their precious stardust! Our little fairy “Lilac” calls her friend “Jack the pirate” to help them! Without any hesitation, Jack accepts and comes to the help of the fairies with all his crew! Pirates and fairies will unite in this mission to find the fairies’ treasure!

This “pirates and fairies” treasure hunt is available to 6-7-year-old children. 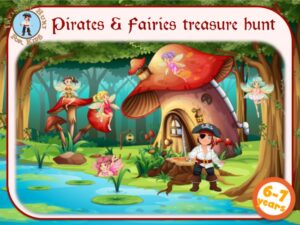 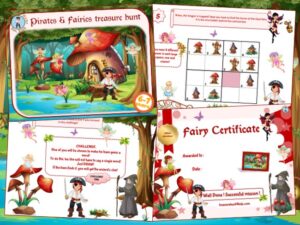 Discover an exciting treasure hunt game where pirates and mermaids will unite to live a great adventure and go in search of treasure together! This game is available to 4-5, 6-7 and 8-year and older children. 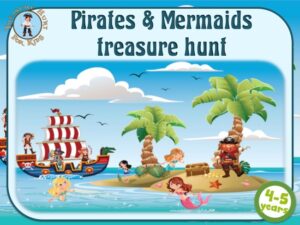 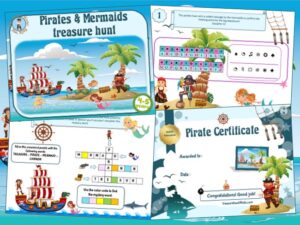 Content of our kits to organize a pirate birthday

Our games are sold as a kit to download and print. Everything is included in the Pirate Treasure Hunt game file: you will find the beginning, the ending of the story and the story-line of the adventure. Of course, 10 riddles and challenges are also provided. These clues will be hidden in your play area. For parents, you will have all the necessary explanations to set up the game. A pre-filled sheet of follow-up to oversee the activity in real time is included. Thanks to this organizer guide, parents will become true game facilitators! Don’t worry! You’ll see that everything is really simple to set up, that you will easily manage to animate the activity with all the parts provided in the kit and that you’ll even have fun! Yes, you will!

A diploma is also included in the kit to reward and congratulate the children for their successful adventure. You will be able to give it to them in person or place it in the treasure chest that the children will have to find. This diploma will give them a souvenir of their adventure and will serve as a support to talk about their activity with their parents once they get home!

Our games are tested and appreciated by the children and approved by their parents!

We have developed a section of completely free games that you can use in addition to your pirate treasure hunt activity:

Find many games to print like our pirate maze or our pirate sudoku! You can also enjoy many free coloring pages on this theme, including a beautiful pirate ship!  Discover a multitude of free, varied, palyful and colorful games for your children to learn while having fun! 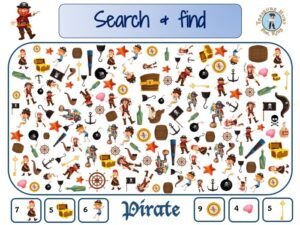 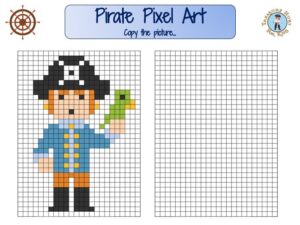 After your pirate treasure hunt, continue with party games and animations related to this theme! Here are some ideas that might help you:

During a pirate party, you can for example distribute to the children a dozen of gold coins… It will be their currency throughout the party. Choose a pirate word that will be forbidden to say! For example, the word: pirate, treasure, ship or cannon… You choose one and this word will not be spoken during the party. Each time a child says the forbidden word then he will have to give a coin to the one who heard it and made the remark… At the end of the afternoon, the one who has the most coins has won and the one who has the least has lost!!!!

On sunny days, take advantage of the garden to organize the pirate balancing game! The principle is to put a plank on the ground on a blue tarp underneath representing the sea. It’s even funnier if you raise it and place a small inflatable pool underneath…

The game is played in several stages:

First of all, the children line up in single file to take turns on the board. The goal is not to fall into the water because otherwise the child is eliminated (or if you prefer not to make elimination then it can also be a forfeit). First, the children pass by walking on the plank…

Once everyone has passed, the children start again, but at each stage, the game will become more complicated!  For example: running across the board, walking backwards on the board, jumping on the plank on 2 feet then 1 foot, or crossing the plank blindfolded…

The little history lesson given at the beginning of this article, remember? Then prepare a quiz on the theme of pirates! The child who answers the question the fastest scores 1 point!

Fill 2 large sandboxes. Bury treasures such as gold coins (fakes of course), jewelry or other small objects that might fit the pirate theme! Then form 2 teams. Each team will stand around a sandbox filled with sand. Start the stopwatch and give them 5 minutes to try to recover as many objects as possible. At the end of this time, each team counts its booty. The team with the most items wins the game!

You have your pirate treasure hunt as the main activity of your party. You have animations around the pirate theme. But you also have to think about everything that is around. To organize a birthday party worthy of the name, you must also think about what should be set up around your main activity!

A fortnight or so before the D-day, prepare the birthday invitations with your child… Adapt of course the realization of these invitations according to his age. He won’t write the ten or so texts on the invitations, but he can easily prepare his list of friends to invite and write their first name on the envelopes with a little pirate sticker, for example! Take advantage of the free online invitations on our site. Each game theme has its own invitation. The pirate invitation is of course available. Your child will be happy to distribute the invitations to his classmates at school… A good traditional invitation is so much more fun for both the person who prepares it and the person who receives it. 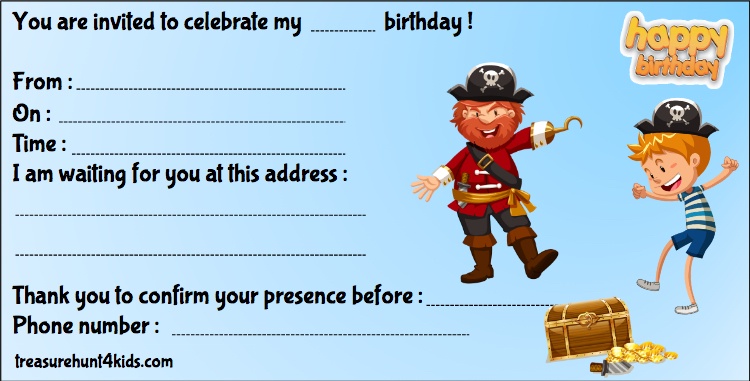 This is a very important part of your party! Creative baking is in fashion with its sugar dough cakes. Try it out and make a beautiful cake in the shape of a ship or anything else with a pirate theme. Pinterest is full of good ideas to use as a model!  Don’t worry, even if your cake has a few misfires, I don’t think the kids ever see them and are impressed with the overall look.

We have created decoration kits to be printed with the effigy of our heroes and game themes. Find the decoration that matches your PIRATE game including: cake topers, gift box, popcorn box, souvenir bookmark, place tag, labels, photobooth and much more. 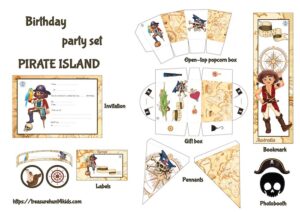 The decoration allows the children to live their adventure to the fullest. Imagine a theater scene without a decor… It is possible but it is always faster to get into the subject and leaves more room for imagination when the decor is present. The decor is important for children to immerse themselves in the atmosphere of PIRATE. Your child’s birthday is a special moment! The decoration must be out of the everyday life and be just as much!

Plan disguises on the theme of pirates or, failing that, some accessories! You can also propose to the children to come in disguise for those who wish. This is not mandatory but remains a “little extra” that you can put in place to develop the pirate theme to its maximum.

You will have understood it! You want your child’s party to be as successful as any parent’s! Organizing a PIRATE birthday party is a sure value that everyone enjoys! You now have everything you need to launch into a themed snack! Thanks to our treasure hunt kits, everything is turnkey!

Discover all our treasure hunt game themes to easily organize a birthday party!