Balloon party games are a cheap and fun way to entertain children at a party or just at home on a rainy day.

Balloons are one of the favorite toys of children and their parents. Inexpensive, far from the screens and a pretext to move and expend, it is ready to use and allows a multitude of different games.

Keeping the kids busy during the vacations or at a birthday party can be a headache. Have you ever thought of using balloons? This ancient game is now back in fashion for the happiness of children and adults alike!

The balloon, a timeless and fun game.

The balloon is a game that is still in use today, yet its invention dates back to 1824. It is the English scientist Michael Faraday, specialist in electricity, who is at the origin.

His research was not originally for fun, but for the thorough study of hydrogen. It is only a century later that this object is marketed on a large scale with a ludic aim mainly to amuse the children.

Balloons are fun, balloons are colorful and balloons make everyone happy! Now here are some fun ideas for kids birthday parties that require inflatable balloons.

Tennis is hard. Ball tennis is EXTRAORDINARY and EASY. After a short craft time to build rackets with sticks and paper plates, you can have a tennis competition. Build as many rackets as you need for the number of children present. Organize a tennis tournament and see who is the best tennis champion of all time!

Balloon Popping: the most fun of all balloon party games

Simply tie a balloon to each player’s feet with a string. Once everyone is ready, everyone tries to pop the other players’ balloons while protecting their own. The last person with a balloon wins!

Everyone loves the game of ring toss. So set up this game at home with your kids. Use helium balloons with scores written on each one, attached to an object on the ground held together by a string. Then throw hoops as rings. Keep score. Whoever has the highest score wins.

Hot Potato: the most traditional of all balloon party games

Turn on the music and have the children pass a balloon around. When the music stops, whoever has the balloon in their hands must pop it over their head!

Take a bunch of red balloons and draw ninja faces on them. Use nerf guns to shoot all the ninjas in a given time. Whoever shoots the most balloons and blows them up, wins!

This game is an indoor or outdoor game, like the traditional egg and spoon game. But it requires a wooden spoon, a balloon and a suitable space. The children must balance the ball on the wooden spoon.  The winner is the one who reaches the finish line first. This balloon game can be played with water-filled balloons, small sand-filled balloons, or simply inflated with air to give an even slower pace.

This is an outdoor game for more than 2 children. Very simple and easy, just provide a starting line, inflate a balloon per child and place it between their knees, whoever gets to the finish line first without dropping or popping the balloon will be the winner. Children can stand at the starting line all at the same time to race each other. You can also set up this game as a relay if there are many children.

Capture the Balloon: the sportiest of all balloon party games

This is a version of the “Capture the Flag” game but with inflatable balloons. This version of the game is ideal for a family reunion, summer picnic, birthday party, group game or any event where there are several children and lots of outdoor space. To play, divide the players into two teams. Assign a color to each team; one team blue and the other team red (or both colors that suit your party theme). Give a red balloon to each player on the red team and a blue balloon to each member of the blue team. Choose which team will be “first”.  Set a time limit of five minutes. This team must spend the five minutes trying to touch the members of the opposing team. When a player touches an opponent, the opponent must give the ball to the player who touched them. After three minutes, reverse the roles. When the time is up, count the number of balls for each team (balls that have popped or been lost during the game do not count). The team with the most balls wins.

Character Creation: the most creative of all balloon party games

With balloons, why not offer to have your child decorate them? Favorite animals, cheerful faces and other creations are welcome!
To do this, equip yourself with markers, paper, glue and scissors:

For the more “sporty”, the balloon can be recycled into a volleyball! Practical, it will not harm your interior. To do this :

Throw the ball as high as you can and have fun tossing it back and forth without it touching the ground!

Break out the colors

Divide the children into two teams. Give each team a bunch of inflated balloons (use an equal amount of balloons for each team and assign each team a color) and a chair per team. Children line up in single file. At the signal, the first players on each team must run up, pick up a balloon of the team’s assigned color, take it to the chair and sit on it until it pops. When it pops, it comes back to touch the next player, who must then pick up a new balloon and sit on the chair to pop it. The game continues until one team has popped all of its balls. The first team to do so wins.

This game is similar to the traditional darts game. Tie or attach balls to a large cork board. Children stand in single file behind a starting line. Each child will have 3 arrows to try to pop the balloons. Award one point per child for each balloon popped with a dart. The child who pops the most balloons wins the game.

Set up a simple obstacle course and have each child get on all fours. Have the children try to blow the ball through the course. You can also have children place their balloons between their legs and try to complete the course that way.

Playing basketball with inflatable balloons is possible. Kids love to shoot the ball in the basket. This time, kids will have to shoot at laundry baskets or a large trash can with inflated balloons. This game doesn’t require much equipment and is very easy to set up.

Back to Back the most craziest of all balloon party games

Children stand in pairs and back to back with a balloon between them. They must wait for the finish line without dropping their balloon. If not, they go back to the starting line and start again with a new balloon…

Secret Messages: the most original of all balloon party games

Have children gather and pass a balloon to each other as they dance to the music. When the music stops, the player holding the balloon must call out another player’s name and throw the balloon in the air. The player whose name has been called must try to catch the balloon before it hits the ground. If he/she fails to do so, he/she is eliminated from the game. The game continues for several rounds or until all but one player has been eliminated.

A great game to start a birthday party and get to know each other. Children sit in a circle and a balloon is thrown into the circle. The child closest to the balloon catches it and says his or her name, then tosses it to another child who also says his or her name. And so on until everyone has said their name several times. Then, for the second step, the same process begins but when the ball is caught by someone, they must name the person they are throwing the ball to. That person catches the ball and does the same with another person. When everyone is comfortable, the process can be sped up: kick the ball directly instead of catching it so that everyone has to think faster.

Do not touch the ground!

Give each child an inflated balloon and designate a start and finish line. At the start signal, each child must throw their balloon in the air and take it to the finish line. If the ball hits the ground, the child must return to the starting point. No holding the ball! The first child to cross the finish line wins! If you want to make this game more challenging for older children, the adult can have the child assume different positions, such as crab walking or hopping on one foot, or have the children kick the ball with their head or feet only.

This is a classic indoor balloon game, perfect for one or more children. The game is very simple, just keep the ball in the air and don’t let it touch the ground. All you need is a suitable space, without the risk of tripping. This game is a lot of fun for kids. The child who keeps the balloon in the air the longest wins.

Balloons are one of the most popular and cheapest items. Balloons are loved by everyone, especially children, balloons are always connected with fun and joy.

Thanks to inflatable balloons you can organize a lot of little games to easily animate a birthday party! 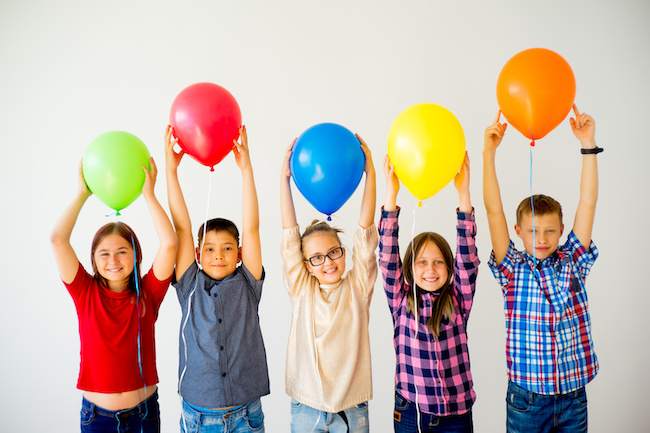