Games and animations to throw a rainbow birthday party

Organize a rainbow birthday party will ve easy with all these games! Here is a colorful idea. Children love this theme that changes the ordinary! Here are a lot of games to organize for this colorful party! Many other ideas of game themes are to be discovered also on our site!

Of course, you’ll need to think about the decoration and the rainbow-themed birthday cake. All this will be quite easy to do! Just make your decoration and table accessories on the theme of the colors of the rainbow. You can choose bright or pastel colors. The invitations will of course be multicolored too. And for the cake, opt for the rainbow cake, a special cake whose recipe you will find here.

But the most complex thing is to find the activities that will allow you to occupy the children during this festive afternoon. So, here are a multitude of ideas to animate your party and entertain the children.

Unicorn Treasure Hunt: the best games for a rainbow party

This unicorn treasure hunt will allow you to organize a great game on the theme of unicorns and the rainbow. It includes 10 clues that will allow children to play together, find the treasure and save the unicorn kingdom by making the rainbow reappear!

Each clue presents a different type of puzzle, game or challenge.  Players work in teams (or multiple teams if you prefer) to solve the clues.  One clue leads to the next until the treasure is found.  This game is available for immediate download.

Prepare two large pieces of cardboard on which you will draw a rainbow. Then draw lines of the rainbow so that each color of the rainbow is represented. Hang them side by side on a wall. Place a roll of tape next to each rainbow card. Gather the children and divide them into two equal-sized teams. Give each team a roll of streamers of each color. Start the game! The first player in line grabs a roll of streamers and lets it roll out behind her as she runs to the rainbow board. When she gets there, she must rewind the paper to make a roll before the next player can pick up another color of streamers and do the same. Once all the colors have been rewound onto the rainbow boards, teams can begin using the streamers to fill in the color spaces. The first team to color their rainbow is the winner.

Use two glow necklaces and connect the ends with the connecting pieces to form a ring. Choose a child to play the role of the unicorn. She will wear a headband on her head with a unicorn horn on top. This is easily found in stores. Have the other children line up. Give the first child a ring and ask him to stand about 5 feet away from the unicorn. They should use the ring to try to place it on the unicorn’s horn. If they miss, they must go to the back of the line and the next person must try. When someone succeeds in placing the ring on the unicorn’s horn, he or she exchanges places with the unicorn.

Gather the children together and explain the following rules.

The tail can try to hide behind the other players to avoid being caught, but it still cannot let go of the other player’s hand. If the head catches the tail, the person in front becomes the tail and the next person is the head. You can continue this until everyone has had a chance to be the tail or until it is time to move on to another activity.

Pin the horn of the unicorn

You probably know the rules of the game : Pin the tail of the donkey! The advantage of this game is that it can easily be adapted to any theme. Instead of drawing a donkey, draw a unicorn and instead of pinning on the donkey’s tail, the children will have to place the unicorn’s horn.

Rainbow sweep: the most fun of games for a rainbow party

Inflate a few balloons of each color of the rainbow and scatter them around the room. Place a hula hoop on the floor. The children will take turns going through it one by one. Give them a broom. Set up the timer. They will have one minute to successfully place one ball of each color of the rainbow in the hoop. The child must have placed 7 balloons of the rainbow colors before the time is up. If not, the child is eliminated from the game or must go to the back of the line to wait for another turn.

To play this game, you will need two bowls of small colored candies. Place the two bowls filled with candy on one side of the room. Then place two empty bowls on the other side of the room. Gather the children together and make 2 teams. You will then give each team a spoon. The goal of the game is simple: The children will have to fill the empty bowls with candy using only the spoon. This game will be set up as a relay race, and the first team to move all their candy wins the game.

Discover all our other “turnkey” games for birthday.

Prepare the game in advance. Keep 7 empty plastic bottles. You can assign each bottle a color. Decorate the bottles as you wish with crepe paper or paint. Each bottle will be the color of one of the 7 colors of the rainbow. Then fill them with water or sand to give them more weight and stability. The less you fill the bottle, the easier it will be to tip over.

Set them up like bowling pins. Use a rubber ball as a bowling ball. Have the kids line up and see how many rainbow pins they can knock over with the ball.

The children will choose a color from the rainbow colors: red, orange, yellow, green, blue, indigo and purple. The rainbow catcher should not hear the colors assigned to each child.

The rainbow catcher : the most original of games to throw an outdoor rainbow party

The children who have been tagged become Rainbow Catchers too. They stand in the middle to help the catcher tag the other players on the next turn. Sometimes the rainbow catcher may yell “Rainbow!” and all players must try to reach the other side at the same time. The last person caught becomes the new rainbow catcher.

Each child can play individually but if there are many children it is better to form teams. Hide objects of different colors in the room or garden. These can be small toys or treats.

Assign each child or team a color. The children will then have to search and find objects only of the color they are asked to find. You can also ask the children to find one object of each color of the rainbow that you have hidden or 5 objects of the same color.

You can also ask older children to find different colored items in nature on their own. They can then write them down on a piece of paper. The first team to find all the elements wins.

You will find a multitude of games on our site dedicated to party games for children. Many of them can be adapted to the theme of your party! 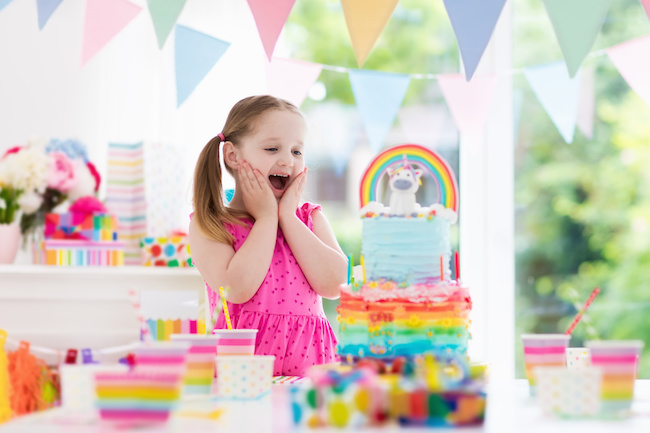