Pick up among our fairy party games to throw an amazing birthday party for your kids. A fairy-themed birthday party is a great idea to throw a party with a whole group of kids. So how about turning your house into a fairy kingdom?  Welcome your guests in a world full of colors, butterflies, flowers and little fairies to put the kids in an extraordinary atmosphere with a party they won’t forget!

In this article you will discover all the games and animations to organize a fairy party with easy to set up animations and all kinds of games to organize both indoors and outdoors.

We offer you turnkey game kits to easily animate a birthday party.

We propose you to discover here our 3 games on the theme of fairies.

Our second game is a treasure hunt for 6 and 7 year olds. In this game kit, pirates and fairies will have to unite to find the stolen fairy treasure. Indeed, the magic dust of the fairies bringing them their magical powers has been stolen. The fairies, without power, call upon their pirate friends to help them. Search for clues and solve the riddles to find the treasure!

Finally, discover our unicorn treasure hunt game available for children aged 4-5 and 6-7 years old . In this game kit, our little fairies will have to help the unicorns in their quest to understand why the rainbow, protecting the kingdom, has disappeared and make it reappear…

If your birthday party is outdoors then this game will delight the kids. Take a large plastic container and turn it into a small sandbox. Add some glitter to the sand to give it a magical look. You will tell the children that this is the magic fairy dust. Form at least 2 teams. The children in each team stand in single file. Each child at the head of the line has a spoon and a bottle or other container is placed on a chair next to the starting point of each team. The child takes the spoon, goes to the sandbox, fills the spoon with fairy dust and returns quickly to the starting point by dropping as little fairy dust as possible and fills the bottle. Then he passes the spoon to the next player who does the same. The first team to fill their bottle wins the game.

Place stools in the center of the room. They will represent mushrooms. You can also put cushions on the floor. Place one less mushroom than the number of participants. Then proceed as in the traditional game of musical chairs. Put on the music, a magical and fairy music, the little fairies will turn around the cushions while dancing to the rhythm of the music. But be careful, when the music stops, the children must take their place on a mushroom. The child who does not have a place is eliminated. Remove a cushion and repeat the game until only one child is left who will be the winner.

Earn your wings: the most original fairy party games

If you have pretty little fairy wings to give to the kids, here is a fun game to make them win their pair of wings.

On small pieces of paper, write small challenges for the children to complete. Fold each one and place them in balloons that you will inflate. Scatter the balloons around the room or garden. Gather the little fairies and ask them to find a balloon in the garden. Once a fairy has found a balloon, she must burst it up and collect the paper inside. The fairies will gather around the adult and take turns doing what is written on the paper they found. If they succeed in their challenge, they will win their pair of wings.

Here are some ideas for small challenges for the children.

Gather the children and tell them that some fairies have gone missing. The children will each have to bring back a fairy that you have hidden in your play area. The fairy can be a small figurine, but if you don’t have one you can simply hide pictures of fairies that you have printed. Each time a child finds a fairy, you can give them a small gift as a reward, such as a small light-up bracelet.

Dance of the fairies

It’s pretty easy to create an obstacle course with a little imagination. Here are some ideas for obstacles, challenges or little games you can set up along the way.

Here is a musical game that children will love. Prepare a small treasure that you will wrap in several layers of fairy paper, for example tissue paper. The children stand in a circle. Start the music. While the music is playing, the children will pass the package from hand to hand. When the music stops, the fairy with the package in her hand must remove a layer of paper. Then the game starts again. Each time, the fairy who is holding the treasure when the music stops, removes a layer of paper. The fairy who removes the last layer and finds the treasure wins. But as she is a very nice fairy, she will share the treasure with her friends!

This game is very fun and is a derivative of the pinata. The gnome will be an adult… He can dress up to make the game more fun. He will have a bag full of candies… All the little fairies (children) will have a wand in their hand. The goal is to touch the gnome with the wand. When the gnome is touched, he is immobilized and must throw a handful of candies in the air to be released. He runs away while the children pick up the candy. Each time he is hit, he must throw candy… The game continues until the gnome has no more candy.

Pin the horn of the unicorn: the most traditional of fairy party games

You all know the famous game: Pin the tail of the donkey. This fun game can be adapted to your party theme. Here, pin the drawing of a unicorn. The children will have to try to place the horn of the unicorn as well as possible while being blindfolded and being guided by the voice of their friends. The complete rules of the game can be found in our website gathering all the party game ideas.

Make 4 lily pads out of cardboard: 2 for each team. Make two teams. Trace a starting line and place an object (a wand) to be retrieved on a chair about 10 meters away on the other side of the pond. From the starting line, the children will have to go as fast as possible to get the object, thus crossing the pond, and bring it back to the starting line. But be careful, to move, the children must use their 2 lily pads. They must not touch the ground because they would fall into the water. They place the first lily pad in front of them and stand on it. Then, they place the second lily pad and take the first one back and move forward by moving the giant lily pads. The first team to bring the object back to the starting line wins.

I hope that all of our ideas for fairy themed games and entertainment will help you put together the most beautiful fairy party for a birthday. 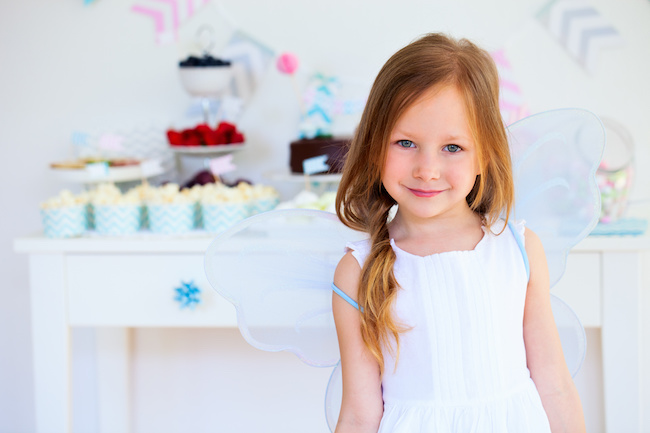