Orienteering is basically a sport of Scandinavian origin dating from the 19th century. By the middle of the century, orienteering became a recognized sport throughout Europe.  It can be practiced on foot and takes place in the middle of nature. The goal is to discover the checkpoints in a prescribed order and to navigate in the open air with the help of a map and a compass.

This activity can be adapted to children and to different playgrounds and is therefore one of the best activities to set up for a birthday party, for example, just like our treasure hunts, investigations and escape rooms for children aged 4 to 12.

How to organize an orienteering race for children?

The goal is to offer a fun and original game to children who will learn to find their way with a map and a compass. Because these are the 2 elements of this great game.

The goal of the game

The goal is to reach a place as quickly as possible. The children will be divided into teams. The team that arrives at the location first, having completed all the steps required in the game, wins.

Appoint a captain for each team. You will give the map and the compass to the captain.

Once all the necessary elements are in their possession, the teams can begin their race.

An orienteering race can be practiced almost anywhere. You will have to choose the place where the race will take place. The ideal place is in nature and green spaces, although it is possible to organize an orienteering race in the city.

In general, organize your course in a forest, in a park, through fields or any other natural place.

An orienteering race has to be prepared. You must go to the chosen location and inspect the area.

To make a map you have several options.

You can also use some sites that allow you to have an aerial view of a specific area. Select your location, zoom in on your area and print the map. Remember to place the cardinal points on the map, which will be necessary for the children to orient themselves with the compass.

Orienteering is a sport that involves a race marked out on a map.

Once you have marked on your map the different areas where you will place your markers, you must put them in place. Place your markers in the exact locations you planned. Identify each marker with a number so that they can be clearly separated and identified.

Everything is ready. The children are gathered at the starting point. All you have to do is give them the explanations of the game and the safety instructions. Depending on the age of the children, the instructions will of course be adapted.

Indeed, each team must not separate but stay in a group. If the children are young, an adult will accompany each team. It is also possible to provide an adult at each step of the course. In addition, provide a whistle for each team with an emergency code… For example, whistling 3 short blasts means that the team needs the help of an adult…

The different types of markers

For an orienteering race, you have to mark the course with signs left on the ground.

Imagine 8 stages to your course.

You can imagine that each marker corresponds to a letter and that by collecting the 8 letters at the different locations, then the children will have to reconstitute a word.

The children can also collect 8 small objects hidden on their way.

You can also place messages that will give an indication on the location of the next checkpoint for example: “near a big tree” or “under a big stone”… In this case, the first message will be given to the children at the start to find the first control point.

Each marker will be placed at a roughly equal distance from each other. The distance will be adapted according to the age of the children. It can go from twenty or thirty meters to 200 or even 300 meters (even more for older children).

Introduce children to the use of the compass

Children will discover the cardinal points, learn to find their way in large space and how to use the compass. This may require a few reminders beforehand.

Having a compass is good, but it is useless if you can’t find your way around with it.

A compass is a measuring instrument that allows you to orient yourself by locating north with the help of a mobile and magnetic needle.

A compass has 3 elements:

To follow a direction, i.e., from point A where you are to point B where you need to go, you must : 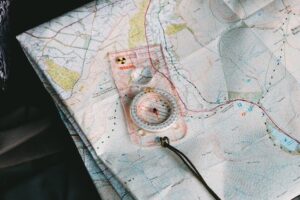 Objectives of an orienteering race

The end of the orienteering race

Remember to bring a picnic or a snack depending on the time of day for the arrival of the teams. The first team to reach the meeting point and collect all the markers wins the game. You can provide a reward for the winning team.

But it will be very appreciated by the children if a good snack awaits them at their arrival.

Orienteering is a sport activity that can easily be adapted to be organized with children. This activity can be adapted to children of all ages. You will just have to adapt the type of terrain, the distance covered, the difficulty of the hiding places of the markers…

Children love to participate in this type of game, which is like a great adventure for them, perfect for a birthday party or a family weekend.

The International Orienteering Federation was established in May 1961.

Also find all our “turnkey” games of treasure hunts, investigations and escape rooms to easily animate a birthday party at home. Discover our website which lists all the game ideas for your birthday parties. Get a lot of great ideas!