Here’s our guide to organizing games and activities to complement your treasure hunt at a birthday party to keep the kids occupied for the time remaining before their parents return! You will find here many ideas for children’s birthday games and other activities for a children’s gathering or simply to play with the family: brain games, coop games, imagination games, running games, skill games, musical games, mimic game and even water games… Indeed, after the organization of your birthday game, (treasure hunt, police investigation or escape game), there is often the famous snack and gift time! Yes, but afterwards? There is often still 1 or 2 hours where you will have to set up small activities or games to keep this little world still full of energy! And yes, you know it well, children never stop and often ask for even more!

So, to help you out, we decided to put together this practical guide of ideas for children’s birthday games, including a multitude of activities to put in place to supervise a group of children and liven up your party. Of course, all of these ideas can be adapted according to the number of children present and their age, depending on your play space, indoors or outdoors! The choice of animations and activities for the success of a birthday party is essential! Keep the children continuously occupied by alternating motor games and quieter ones.  Fill up on ideas for games and activities to organize indoors or outdoors at birthday parties for children of all ages! Follow the guide!

To discover the detailed rules of each game, click on the links. You will have access to a more precise description of the rules of the game and the proposed variants.

Tag game is a running and chasing game known to all children. It is a great way to let off steam. The rules are simple and very easy to set up. This game is therefore a great success. But there are many variations of Tag game such as Tail Tag, Chain Tag,

Band-Aid Tag, Color Tag, Perched Tag, Frozen Tag and much more. Discover all the rules and variants of this game on our website “Party games 4 kids”. 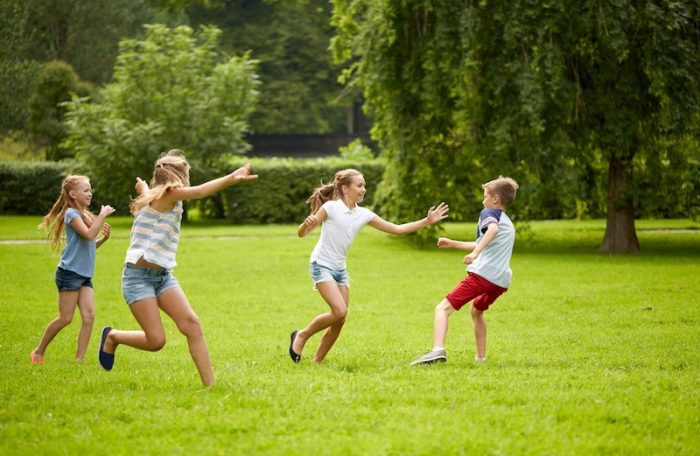 This strategic racing game is very popular with children.

Make 2 teams and delimit 2 camps. Place a different colored flag in each playing area. The children place each other in their zone. There they are protected and cannot be tagged.

But the goal for each team is to retrieve the opposing team’s flag and bring it back to their own camp. Be careful not to be tagged while capturing the opponent’s flag. This game allows children to develop a real team strategy. They will be able to think about how to capture the flag while protecting their own. To do this, some children will have the role of going to capture the flag while others will have to stay in their play area to protect their flag. 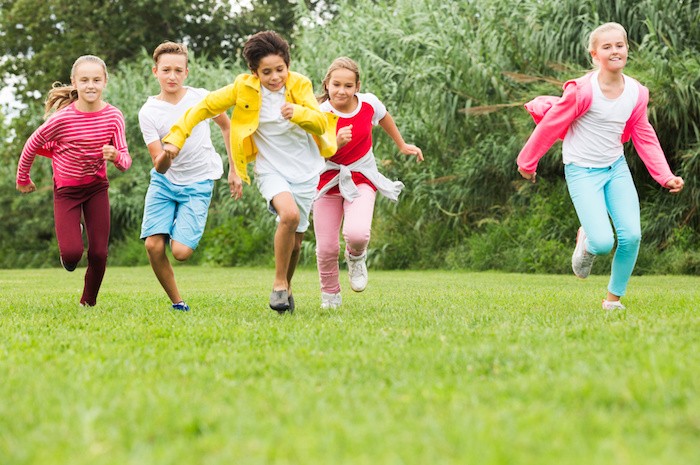 It’s a fun group game that kids love. One child will be designated to be “It” and the other children sit in a circle with a little space between them. “It” will go around the children, tapping them on the shoulder or on the head and saying “Duck” each time. But at some point he will choose to tap a child, saying “Goose”. The child will then have to get up and run after “It” to try to tag him. “It” must continue running around the circle and take the place left vacant by the child. If the child can sit down then the “Goose” becomes “It”. If the Goose tags “It” then he must sit in the middle of the circle until another child takes its place. There is another option : If the goose tags It, then the goose keeps his spot in the circle and It must either continue to be It for another turn or sit in the middle of the circle until another It is tagged. 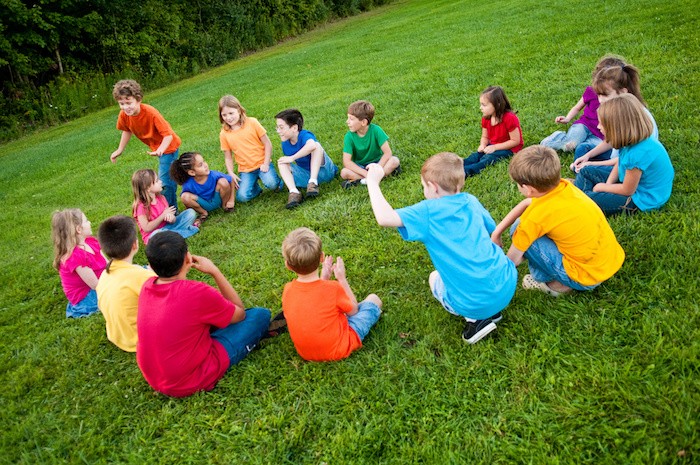 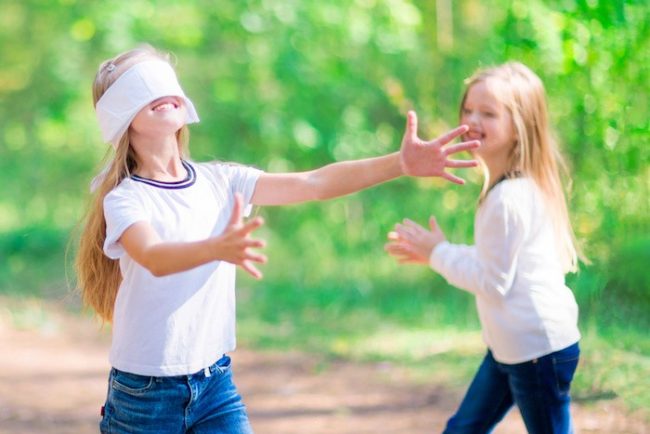 Provide a play area with limits that children should not exceed. In this space, place a hoop that will be the place for the ball (the Can). Next to it, mark out an area that will be the jail. One child will be “It”. Another child will have to kick the Can to send it as far as possible. “It” will then have to hurry to get it and bring it back in the hoop. During this time, the other players will have to hide. Once “It” has placed the ball in the hoop, he will go looking for other players. He will have to come back and put his foot on the ball to say the name of the child who was seen and his hiding place. All foundlings must go to jail. “It” goes back in search of new children. But beware, the other children can move around, come and kick the ball without being tagged by “It”, which will free all the other children in jail. While “It” goes back to look for the ball, he cannot touch anyone and the children take advantage of this to hide again. “It” must therefore find the hidden children and protect his ball. The children must hide and free the imprisoned peers. Successful game ! 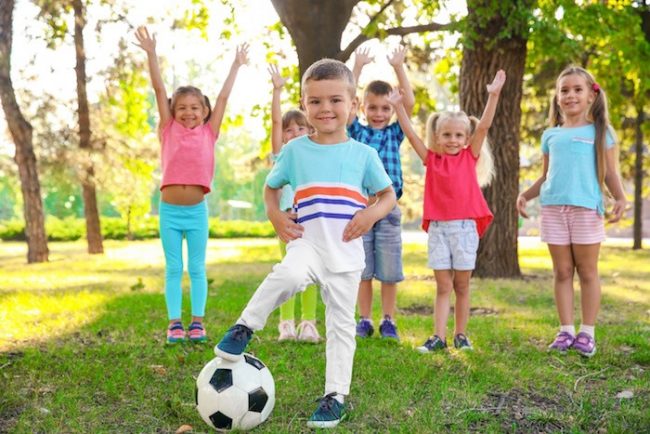 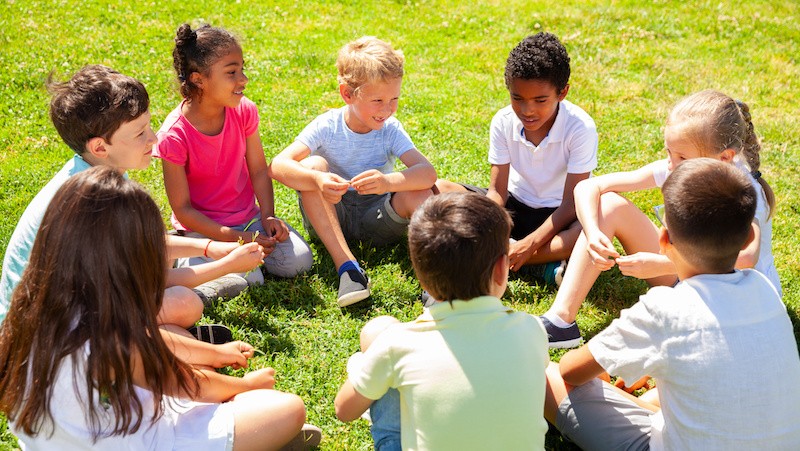 Hide-and-seek is one of the most popular games. All children play it, you can play it anywhere! In the house, in the garden, in a park…

The rules of the game are very simple. You just have to hide while a player is counting. The goal of the game: find the hidden players!

A player is going to count aloud up to a number determined in advance by all the players. He has to close his eyes and during this time the other children will hide. When he has finished counting, the child shouts: “I’m coming”. The child must then go to look for the other players who must not move from their hiding place.

Pin the tail on the donkey 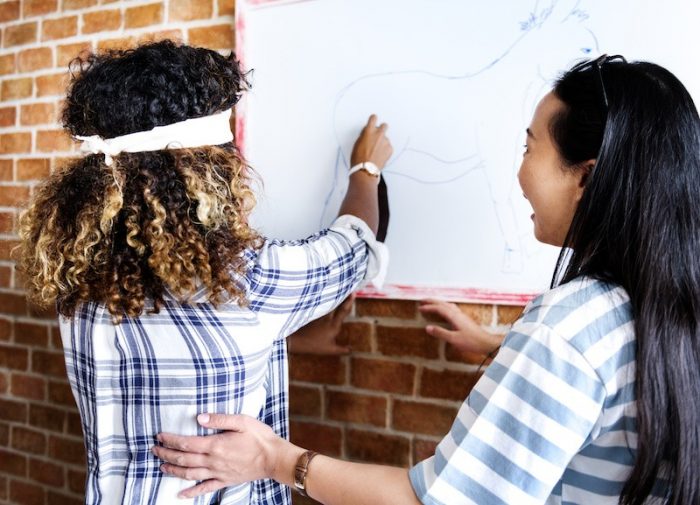 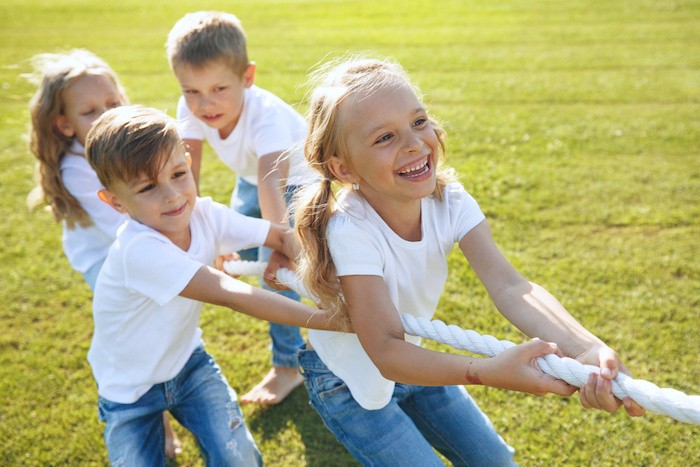 One child starts a drawing and the next player must continue it by adding an extra element and so on. This makes for fun drawings. Discover the game details on Party games 4 Kids. 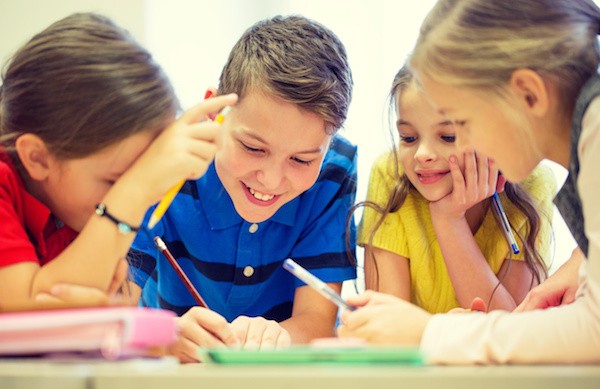 It’s a drawing or writing game that gives really fun results. Children have to draw a picture or write a sentence together without seeing what the previous child did.
For example, for a drawing, children can create a man. The first child will draw the head, fold the paper to hide his drawing and let only the neck appear. The next child will continue the drawing by doing the bust, but will have to fold the sheet again so that the last child can do the legs and feet.
You can do the same type of game with words by hiding the beginning of the sentence and letting only the last words appear…
Find all the details of this fun game that will allow children to have a great time playing with their friends. 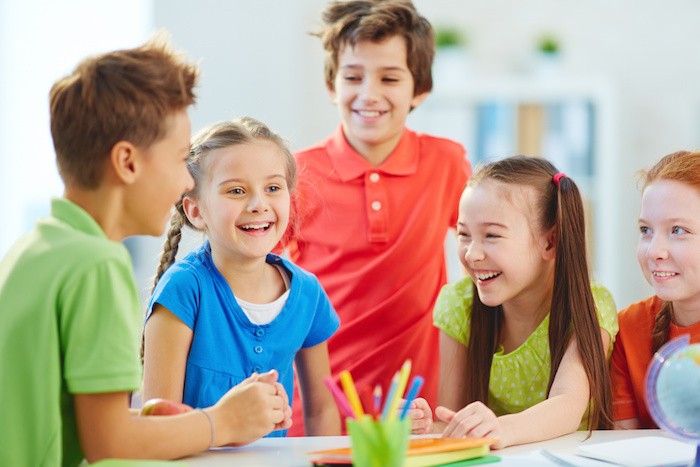 This game is a relay game. Make 2 teams. The children will have to complete a course by holding a spoon with an egg in it. Once the course is completed, the child passes the spoon and the egg to his/her partner. The first team where all the children have passed wins the race. If a child drops his or her egg, the child must start the race again from the beginning.

The children will have to run a race but by jumping inside a bag. Draw a start and finish line. Children all stand on the start line to begin the race. They put themselves in a bag and hold it with their hands at hip height. At the top of the start line, children jump forward without letting go of their bags. The first child to cross the finish line wins the race. 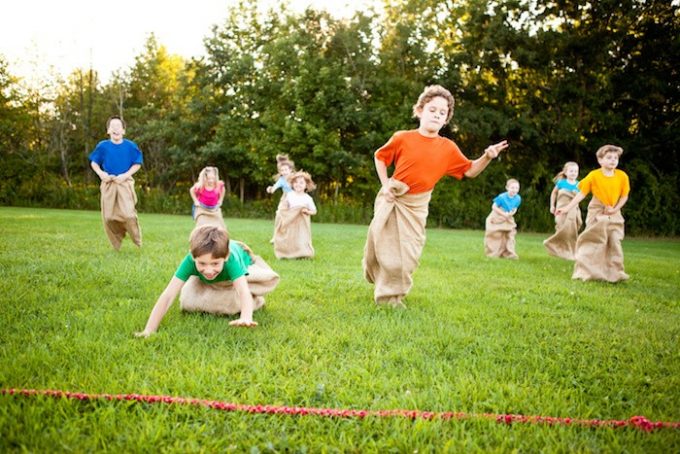 This is a fun game to do with a group of children. Choose a game leader who will be Simon… He will have to ask the other children facing him to perform simple commands such as raising an arm or standing on one foot. But be careful, the children will only have to do what the leader asks them to do when the instruction starts with : “Simon says”…

When the sentence doesn’t start with these words then the children must stay still. Children who make a mistake and do what is asked when it is not necessary are then eliminated. The last child has won. 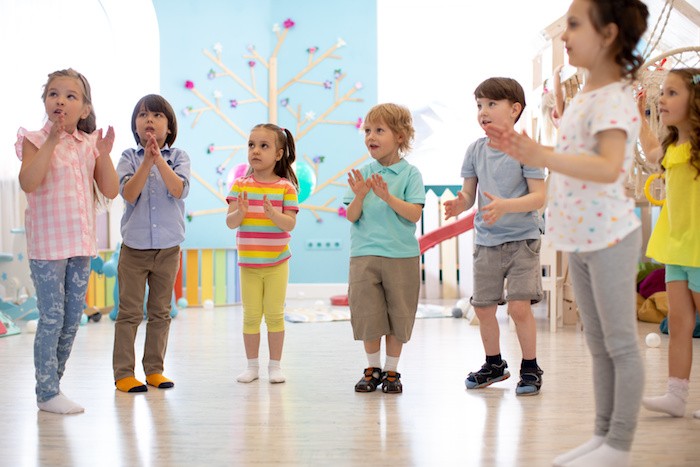 The game of musical chairs is very simple to set up. Start the music. The children will have to turn around the chairs placed in a circle. When the music stops, they must quickly sit down on a chair. But be careful there is always 1 chair less than the number of children participating. The last child sitting wins the game. 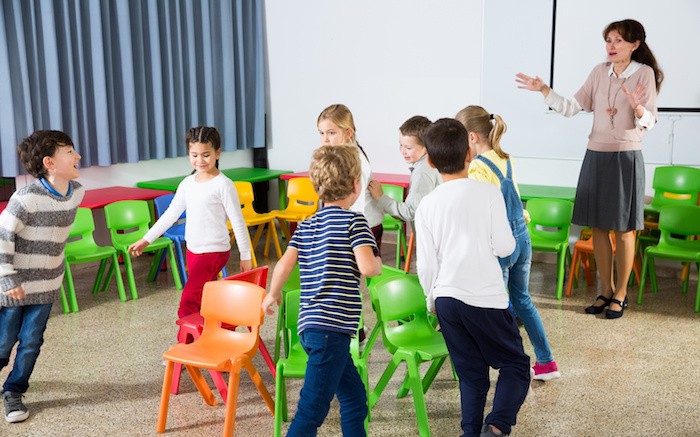 To play Hot Potato, players pass a small round object (a tennis ball, an orange or even a real potato will do) in a circle while the music plays. When the music stops, the one holding the “potato” is eliminated! The children sit in a circle (or stand, the choice is yours: it will be a faster game standing than sitting). The music starts: the first player with the potato in his hand (be careful it is very hot) gives it as quickly as possible to his neighbor on the left and so on. When the music stops, the player with the potato in hand is eliminated. 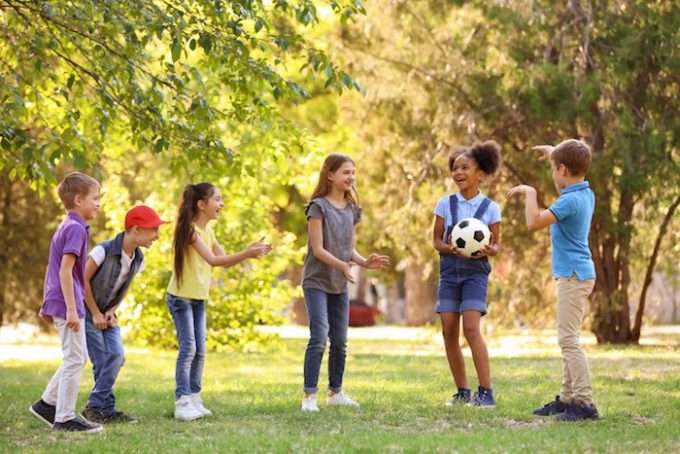 7- Other games for kids’ party

After blindfolding the players, the leader makes them taste different foods with strong tastes (bitter, sweet, salty…). The players must then write the name of each food on a piece of paper.

After hiding various objects in an opaque bag, the leader asks the players to feel the objects so that they can guess them.

After blindfolding the players, the leader will make them hear noises that they will have to identify:

After blindfolding the players, the leader makes them smell different smells that they will have to identify (a flower, honey, fruits…etc.). 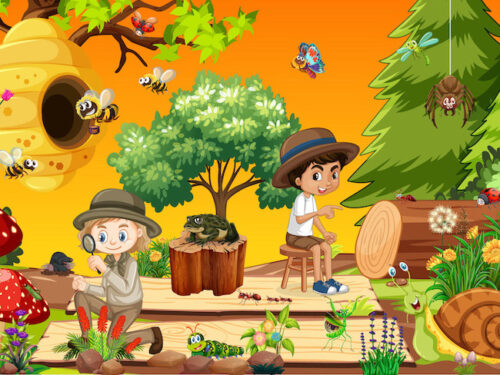