If you are planning a cowboy birthday party for your child, this article will give you many ideas to set up great party games for your kids. Cakes, games, invitations, gifts, animations… You will find here a lot of suggestions to make your child’s birthday party in the Wild West atmosphere a success.

Your child spends his time playing cowboys and Indians with his little sister? Organize a birthday party with a Wild West theme and discover our tips for a birthday party out of the ordinary.

A cowboy treasure hunt : the trendiest of party games

What better idea than to organize a great treasure hunt in the Wild West and become a real cowboy.

So, discover complete and turnkey game kits to help you set up a great adventure. Available for 4-5 years old, 6-7 years old and from 8 years old, your child and his friends will lead a real investigation in the Wild West and will have to eliminate the suspects one after the other on their investigation sheet to find the culprit who attacked the stagecoach this morning just before the sunrise. Ideal for a Wild West and cowboy themed birthday party, this treasure hunt is a sure bet for a successful party.

Once is not customary, the snack will not take place around a table but on the floor, sitting cross-legged of course. To avoid crumbs and stains, plan to put the children on a tablecloth on the floor. With a large sheet of Canson paper, some tape and a few markers, make a sort of teepee that you will place in the center of the circle as a decoration. At the top, plant a few colored feathers for detail.

For the birthday cake, make a target cake. It’s really just a simple pie with rows of different colored fruit on it. For example, a strawberry and apricot (in syrup) pie or a pear and blackberry pie. Choose fruits with contrasting colors to make the target much more visible. At the heart of the target, plant an arrow per child: on a skewer, thread candies or marshmallows and then stick a multicolored feather at the end of this improvised arrow. To reinforce the trapper aspect of this bivouac snack, present the drinks in gourds (tin is even better).

The lasso game : the most traditional of cowboy party games

For outdoor birthday games and entertainment, consider the lasso game. Apprentice cowboys will have fun sending a hoop around the neck of a wooden horse.

The headdress of the great chief

On a large sheet of white paper, draw the silhouette of a great Indian chief. Everything is there: war paint, battle-axe, large headdress. Only one detail is missing: the headdress of the great chief is bald, it has lost its feathers. It is up to the children to redraw them. Each one will have to make two or three… blindfolded! It’s a good bet that the big chief will end up with a few feathers in his nose!

Have a dart throwing contest if you have a dartboard handy. If not, draw a dartboard on a piece of paper and hang it on the wall. With a (foam!) ball, each child should try to hit the center of the dartboard. Be the “judge” and keep your eyes open because everything is going fast.

One of the children leaves the room while the other children choose the big leader among themselves. He or she will be in charge of organizing the rain dance: the others will have to imitate each of his or her movements, as discreetly as possible. When the first player returns to the room, he or she will have to find out who the big boss is by watching the dance unfold before their eyes. Discretion is therefore required. If the big boss is unmasked, it’s his turn to leave.

Cowboys and Indians have one thing in common: the horse. This is a great opportunity to make one. Bring a long wooden stick per person, some strong cardboard, a stapler and some paint or markers. If you have time, you can also prepare some wool. For each child, cut out two horse head silhouettes from the cardboard. Let the children color or paint these two heads to their liking, but make sure they do not decorate the same side of the head twice. When the artists are finished, staple the two heads together all the way around, except for the opening at the neck. Slip the stick through this opening and you’re done! Needless to say, you are now “obliged” to organize a horse race! The bravest, or the least in a hurry, will make a mane out of strands of wool that they will glue on one of the two heads.

Small gifts for the birthday guests.

At a themed birthday party, if you’ve taken special care with the decor, it’s a shame to lose it all. So hand out some things to the kids before they leave. A water gun per person and some feathers will delight your cowboys and Indians. Otherwise, consider plastic cowboy and Indian figures to play with at home. You can also print on sticky notes, portraits of the most famous cowboy: Lucky Luke. Cut out these images and hand them out at the end of the day.

Golden searcher (3 years and up)

one of the cowboys and indians games preferred by children. Does the gold fever in the American West speak to you? Honor the history and tradition of these westerners with this game.

Check out all our other treasure hunt themes to easily animate a birthday party.

Cattle pen: the most exciting of all cowboy party games

In this game, one player is the rancher (cowboy or cowgirl) and tries to pen the cattle. The other players are the cattle. Tape off a square on the lawn to be used as a pen.

The game begins with the children running free while trying to avoid being caught by the rancher. When a player is hit, he or she must move to the pen. Another cattle player can enter the pen and touch them to free them, but if that player is caught by the rancher while doing so, they also become a cowboy and must help put the other players in the pen. The game continues until all the cattle players are in the pen. This same game can be played when the pen is a jail, the cowboy then becomes the sheriff and the other players are bank robbers.

Play the game: Set up a long row of empty cans on a low wall. Buy enough water guns for your guests. Buy the same ones for everyone so that everyone has a fair chance. Make sure the guns fire well, otherwise the cans won’t be knocked over. Before the game, fill the water guns with water. Draw a chalk line to create a boundary line between the wall and where everyone will stand to shoot. Everyone shoots at the boxes. When someone hits a box, they get 1 point, 2 points if they knock it over. Take a few turns. The person with the most points wins the sharpshooter prize.

You can also split the group in half and have each group line up back to back with a member of the opposite group. The sheriff (referee) will count from 1 to 10. When “10” is called out, each cowboy must turn around and shoot a member of the opposing team while yelling “shoot”! Whoever is hit is eliminated. If two people hit each other, they are both eliminated. When the guns are empty, the players fill them up and the game continues. The rounds continue until only two players remain and they are both winners.

Have children stand in a straight line and place a Santiag-style boot a few feet away from the first player (vary the distance for difficulty). Give each child a cheap plastic snake and they take turns trying to throw it into the boot. You can also use a cowboy hat to make the target easier.

Relays are always easy to incorporate into a theme and are great games for kids to run around in. Make a horse relay using broomsticks (or horse heads with handles) as mounts, make a course where kids have to bring back a horseshoe, feather or other, make a race to the team that builds the most beautiful teepee, etc…

Cowboys were herdsmen so why not make a relay using 6 inflated balloons as a herd for each team and the players will have to take them from one point to another using a broom, each in turn. A must for cowboys and Indians games!

Pin the tail of the Donkey, Cowboy version

Pin the tail of the Donkey is a classic game that is often modified to fit the theme of a party. In this cowboy version, instead of pinning on a donkey’s tail, kids put a mark on a cow.

Hang a poster of a cow. Cut out a large horseshoe-shaped sponge and attach it to a stick. Dip the horseshoe sponge in paint. Blindfold the players and see who comes closest to marking the cow in a predetermined spot.

Other variations of the tail pin game:

I hope that all these ideas will help you organize a Cowboy, Cowgirl and Wild West themed birthday party as easily as possible. I’m sure your party will be a real success. 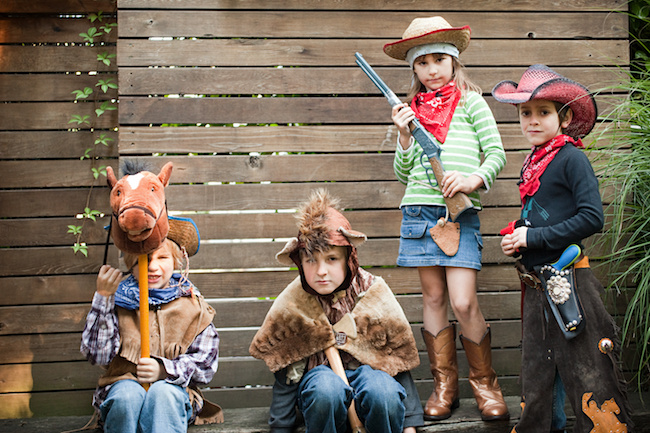